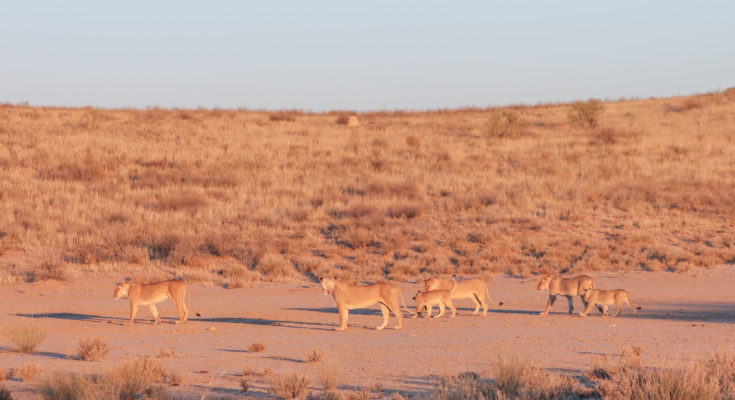 Dry, sandy and unforgiving. It’s the only way to describe my first impression of the Kgalagadi Transfrontier Park with its dunes and rocks and vast plains of nothing. 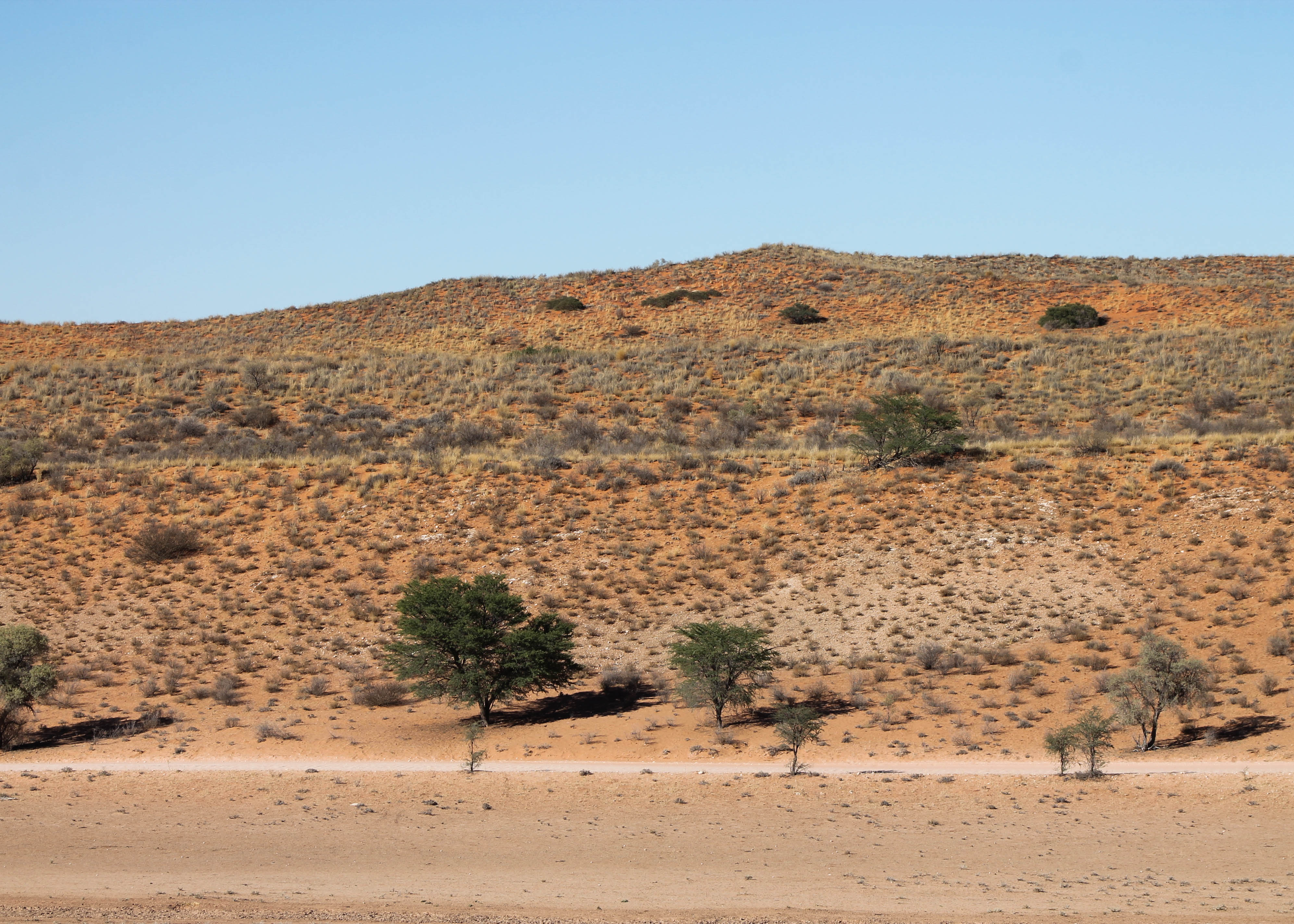 Originally established on 31 July 1931 as the Kalahari Gemsbok National Park, the park has undergone some major changes since then and was officially reintroduced as the Kgalagadi Transfrontier Park on 12 May 2000.  Covering 37 991 km² in total of which 9 591 km² sits in South Africa and 28 400 km² in Botswana, the park is the first transfrontier park in Africa and is fast becoming a world leading example of what successful nature conservation looks like. Unlike the other national parks in South Africa, Kgalagadi is far away from everything. Having to travel just over 1 000 km from Johannesburg, the general tourist opts for something closer to home and only the bravest, most hardiest of adventurers dare to travel all the way up. This allows the park to be one of the most untouched nature conservation sites in the world. 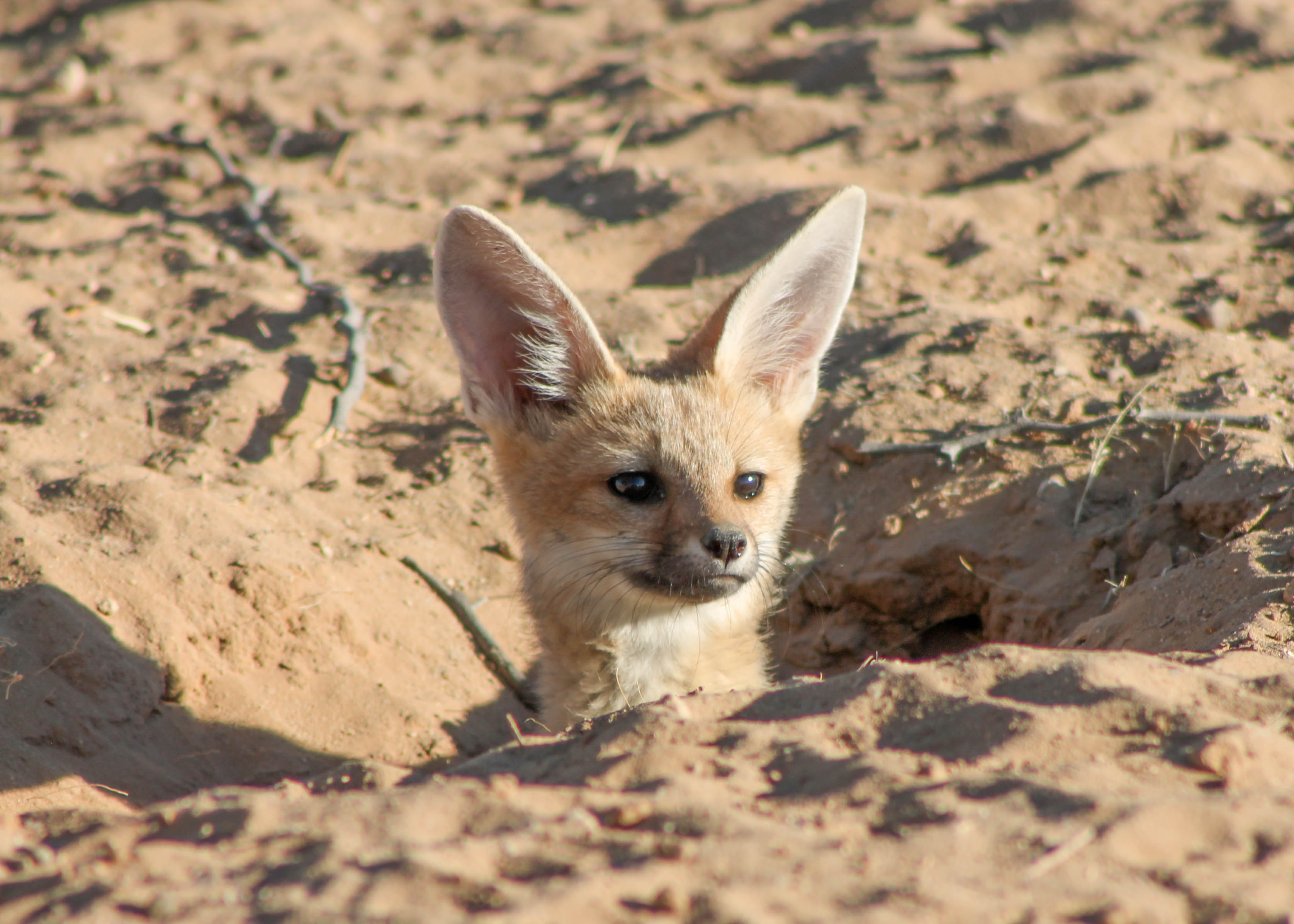 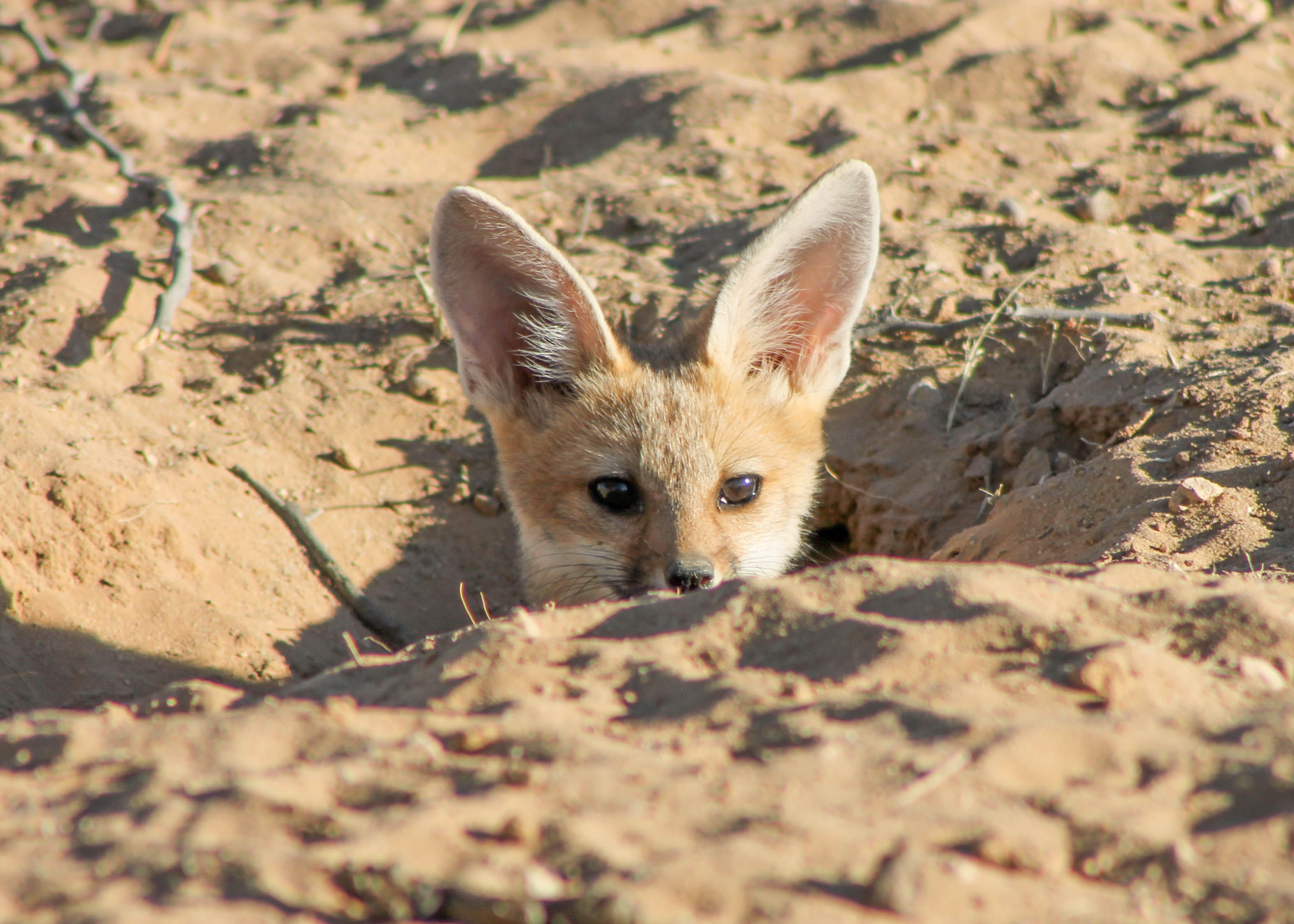 I got to spend 8 days in the park and realised very quickly that Kgalagadi is truly a birdwatcher’s paradise. During my stay I got to mark off 33 new species in my trusty Newman’s Birds of Southern Africa guide, including 4 species of owls and 5 species of eagles. My personal favourites were the scaly-feathered weavers with their small pink beaks. In the Twee Rivieren restcamp they are all over the place and, sadly, seem to be quite accustomed to people. Scavenging for crumbs, the little birds came so close that I was able to catch a few with my hands. Their close relatives, the sociable weavers with their distinct pale-blue beaks are also common in the Kalahari and build nests so big they pull entire trees down. 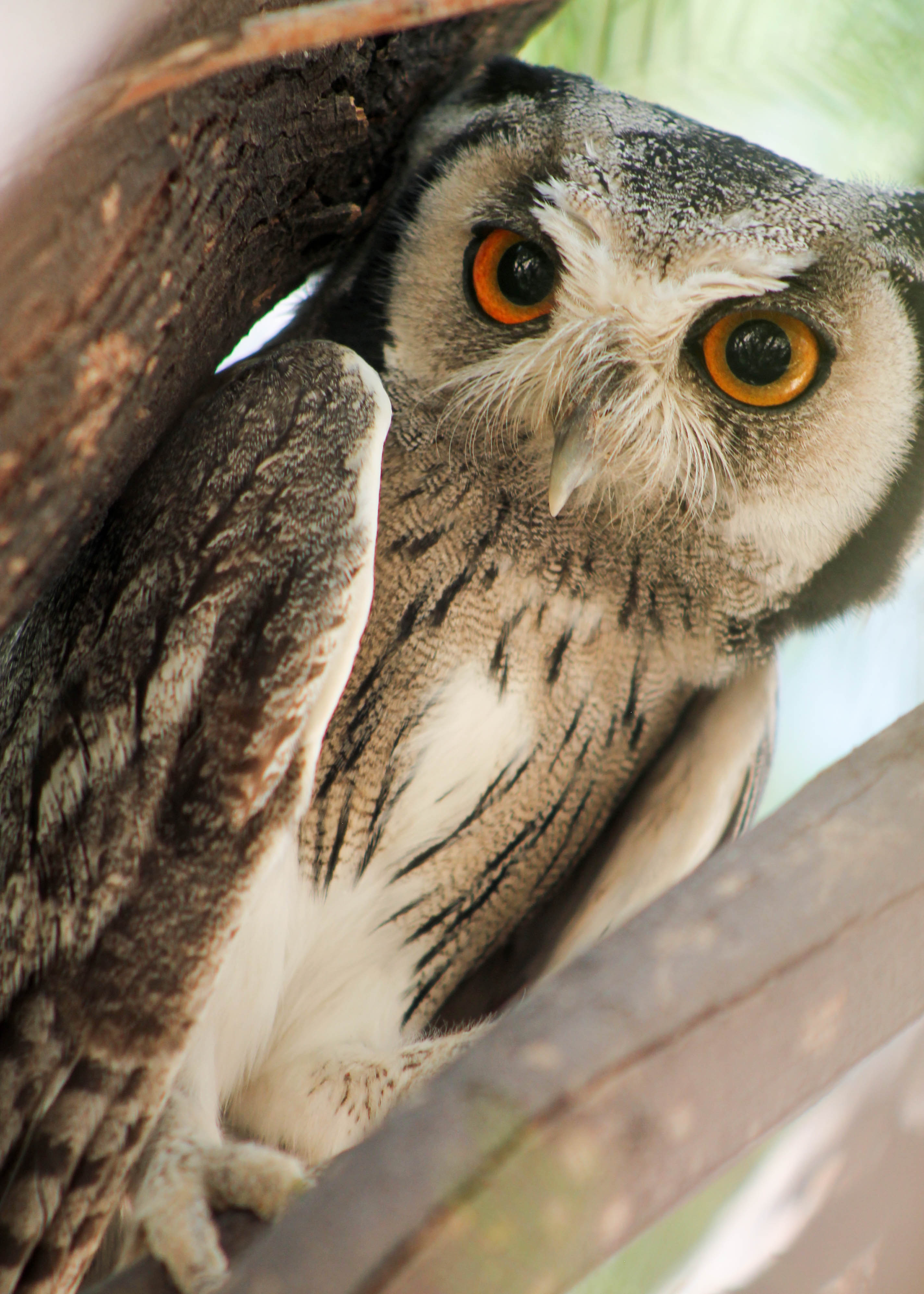 Other birding highlights included a close-up encounter with a gorgeous southern white-faced scops-owl and watching Namaqua sandgrouse at the waterholes. Rather amazing birds, the Namaqua sandgrouse gather in large numbers, sometimes in their thousands, at waterholes where males not only drink, but also rock side to side in the water while shaking their belly feathers. This allows their feathers to fill up with 25 millilitres of water that can be transported back to their chicks in a nest up to 35 km away. When filled up with water, the sandgrouse are heavy and can’t take to flight as quickly. This makes them easy targets for predators and jackals catching sandgrouse is a popular and well-photographed spectacle in the park. 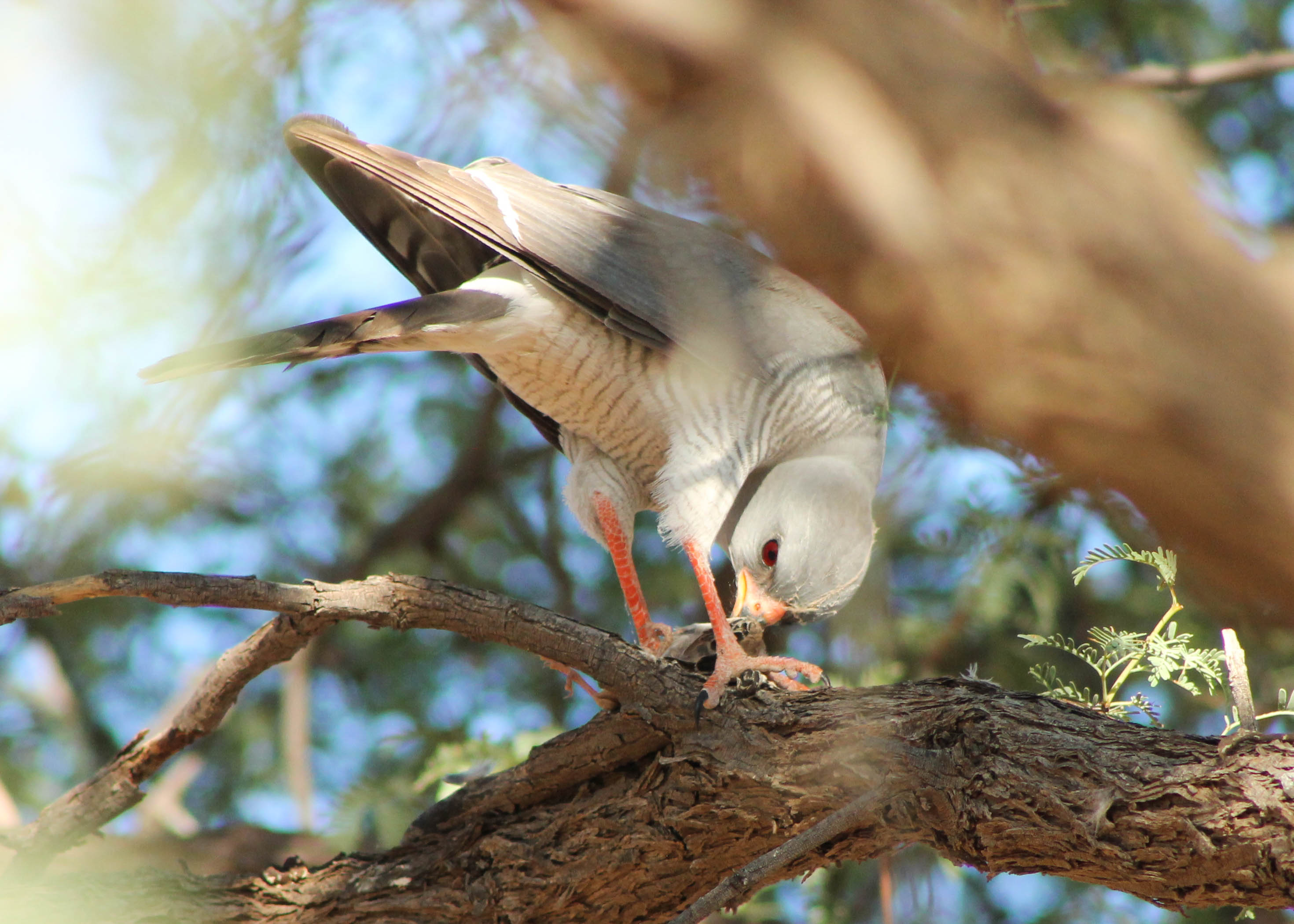 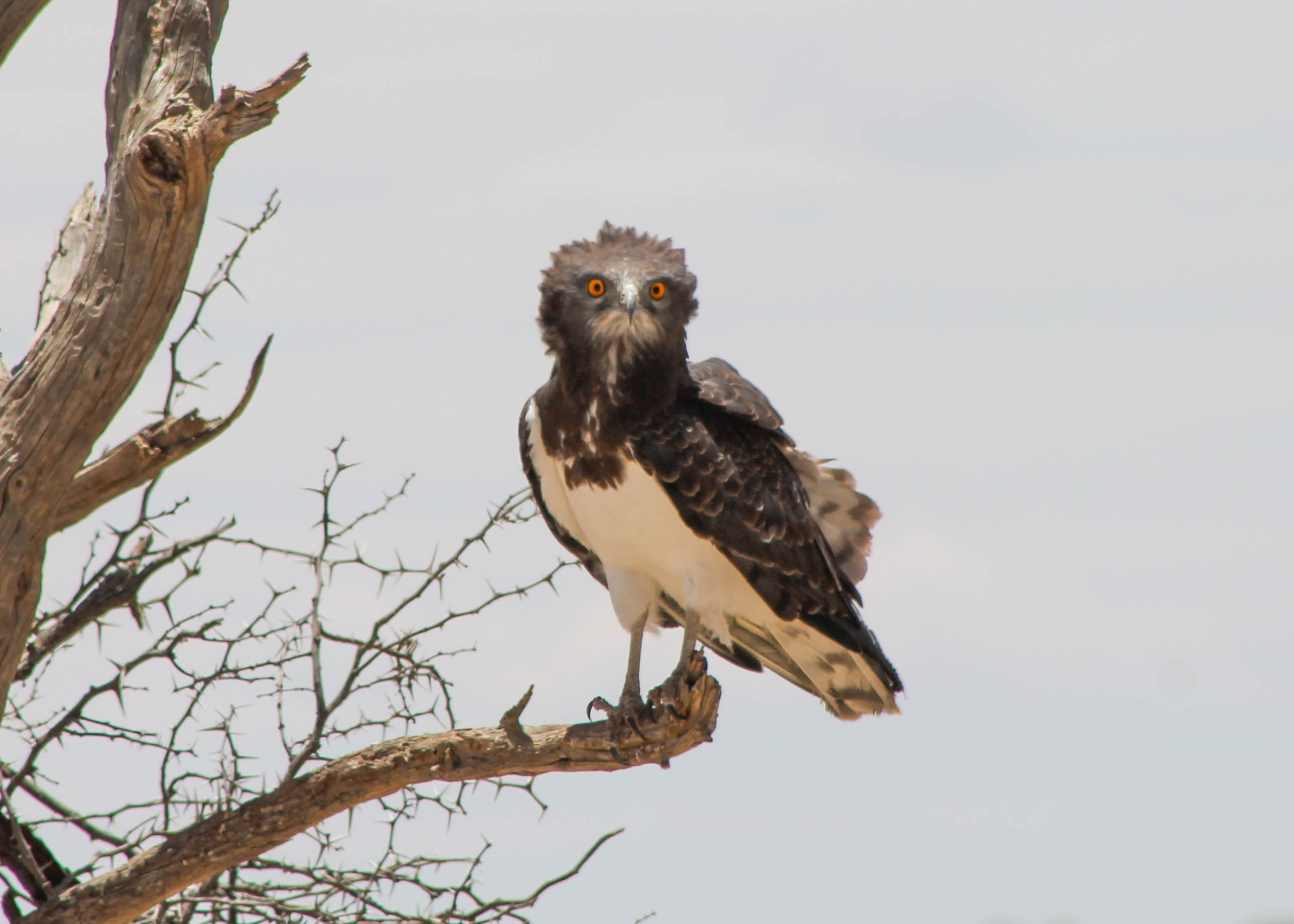 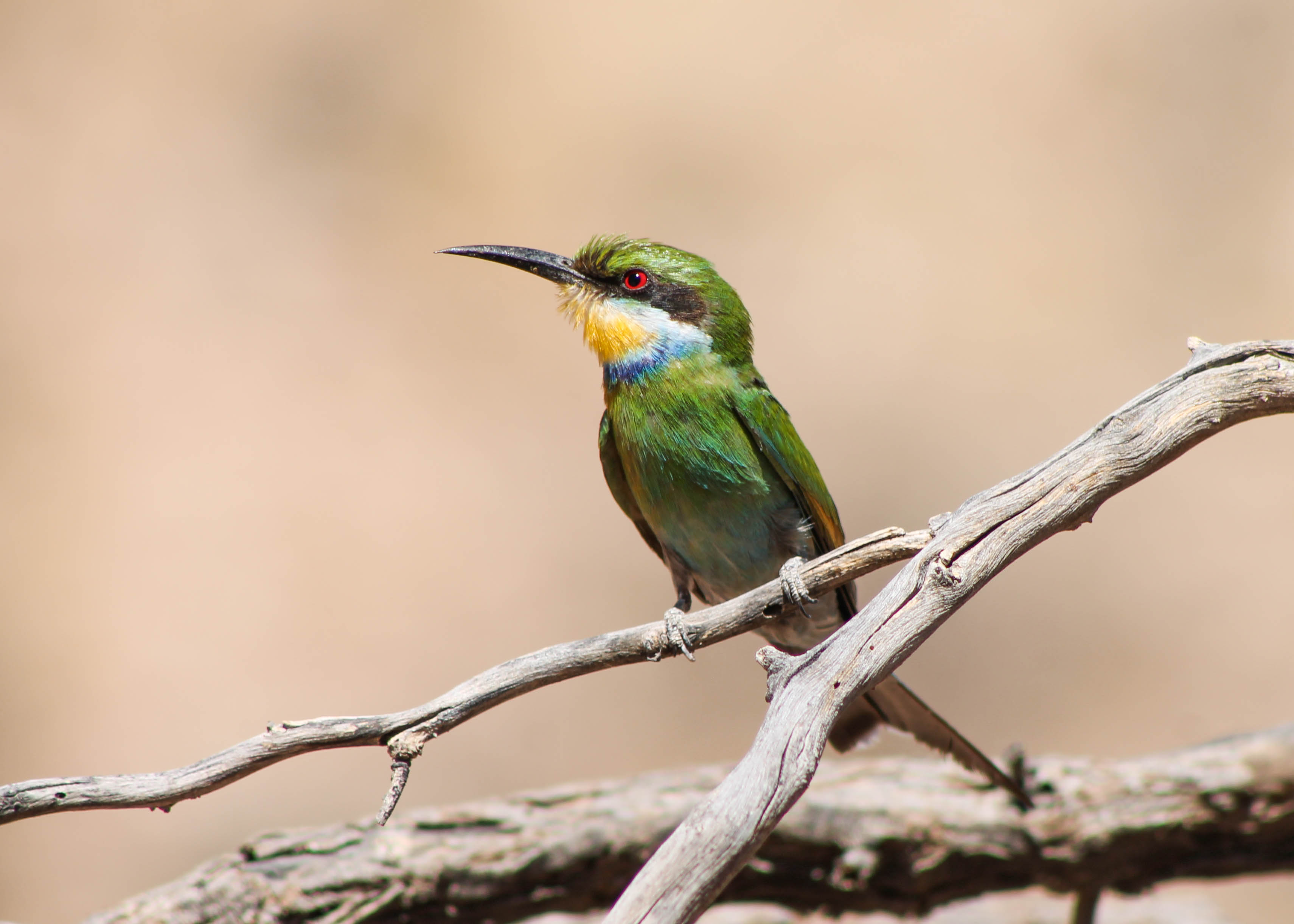 And even though water is scarce and the climate is harsh, a wide variety of animal species thrive in the desert. Lions, leopards, jackals, cape and bat-eared foxes, brown and spotted hyenas, wild cats and caracals are abundant and due to the limited vegetation wildlife photographers get the chance to take wonderful photographs of them without any distractions. Thousands of springboks, blue wildebeest and oryx are always to be found close to life-saving waterholes feeding on the very little, dry grass available to them. Less common, you are very lucky to catch a glimpse of a kudu, giraffe or red hartebeest close to Camelthorn trees – known as the Tree of Life in the Kalahari due to the shade it offers. 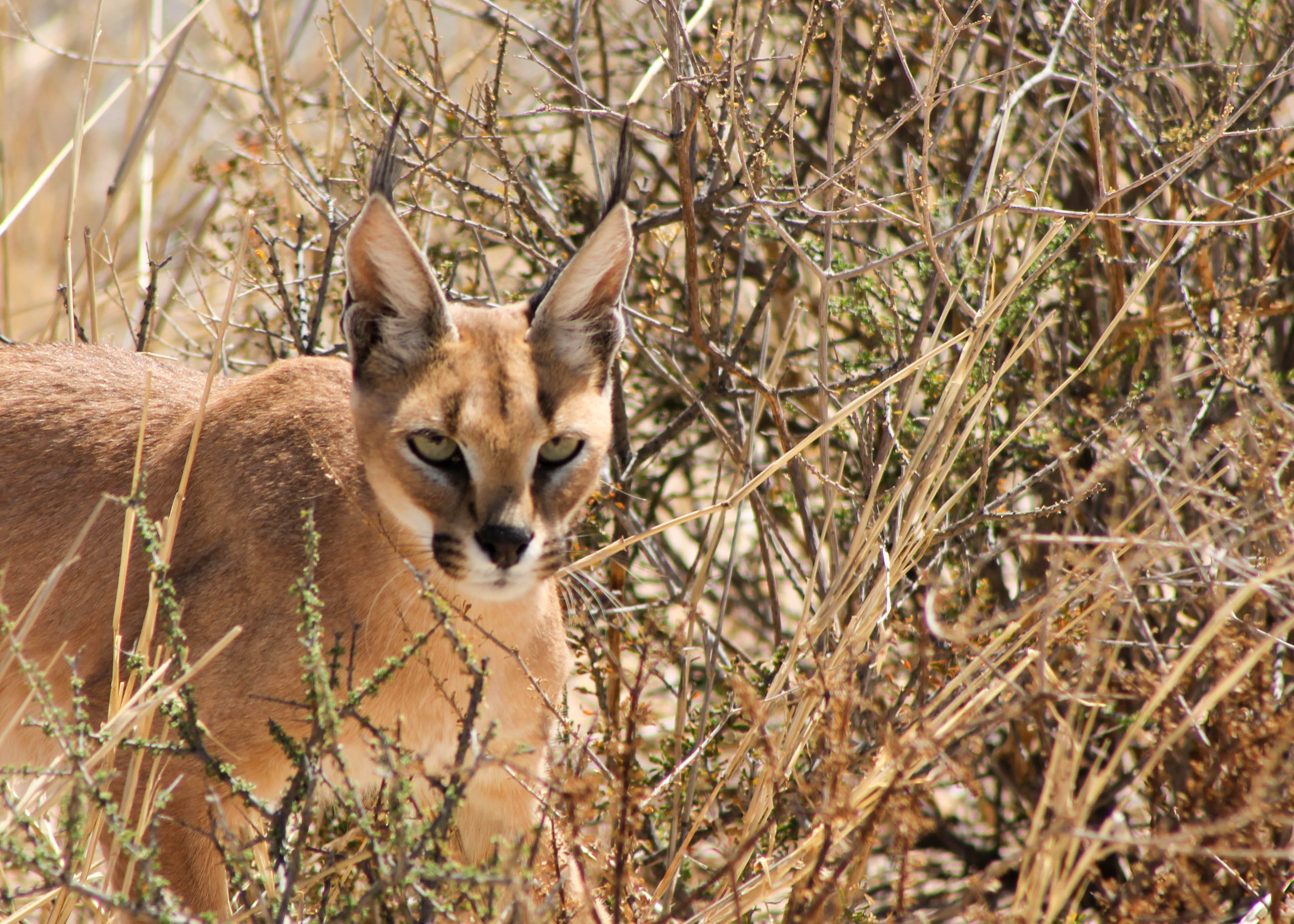 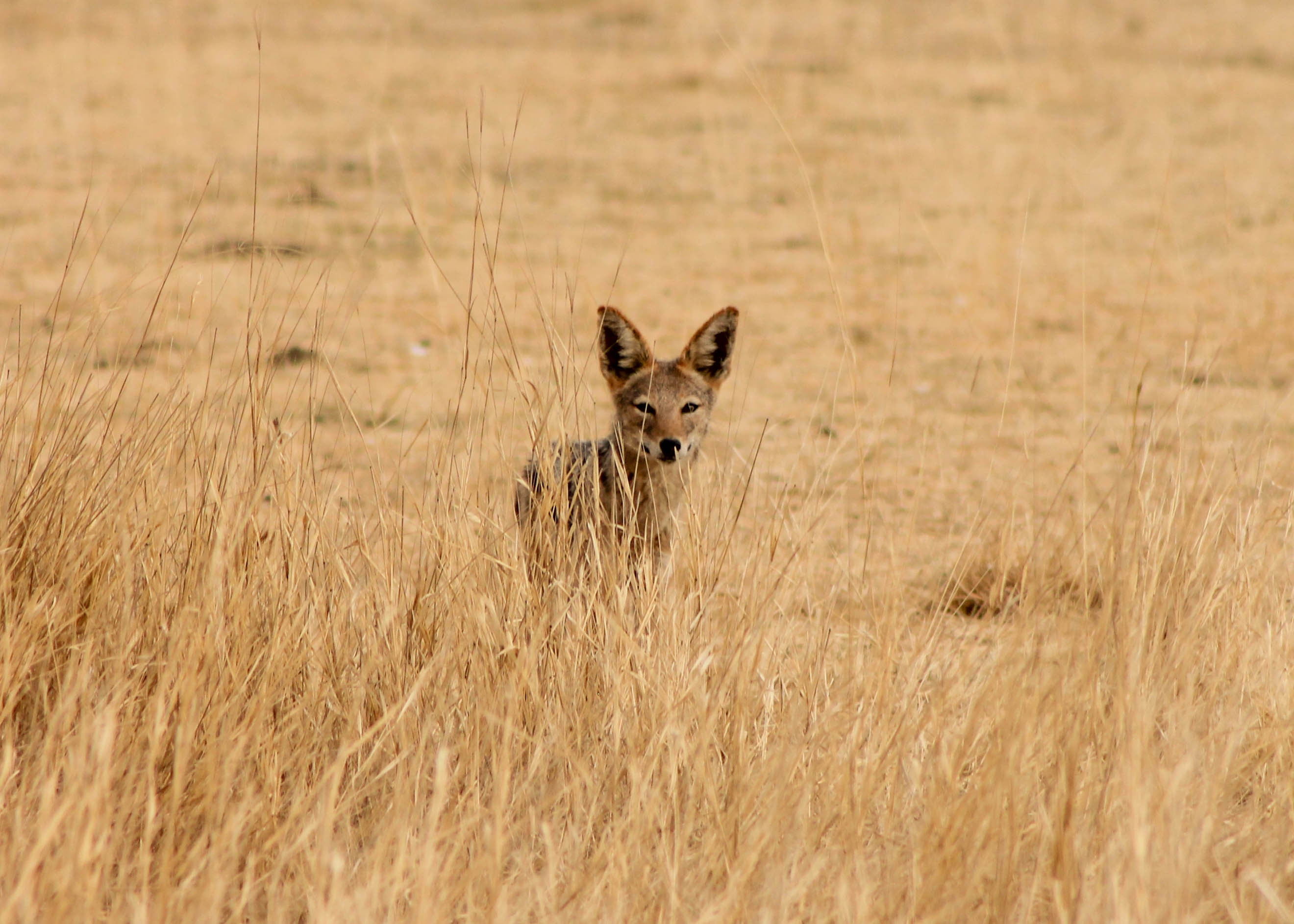 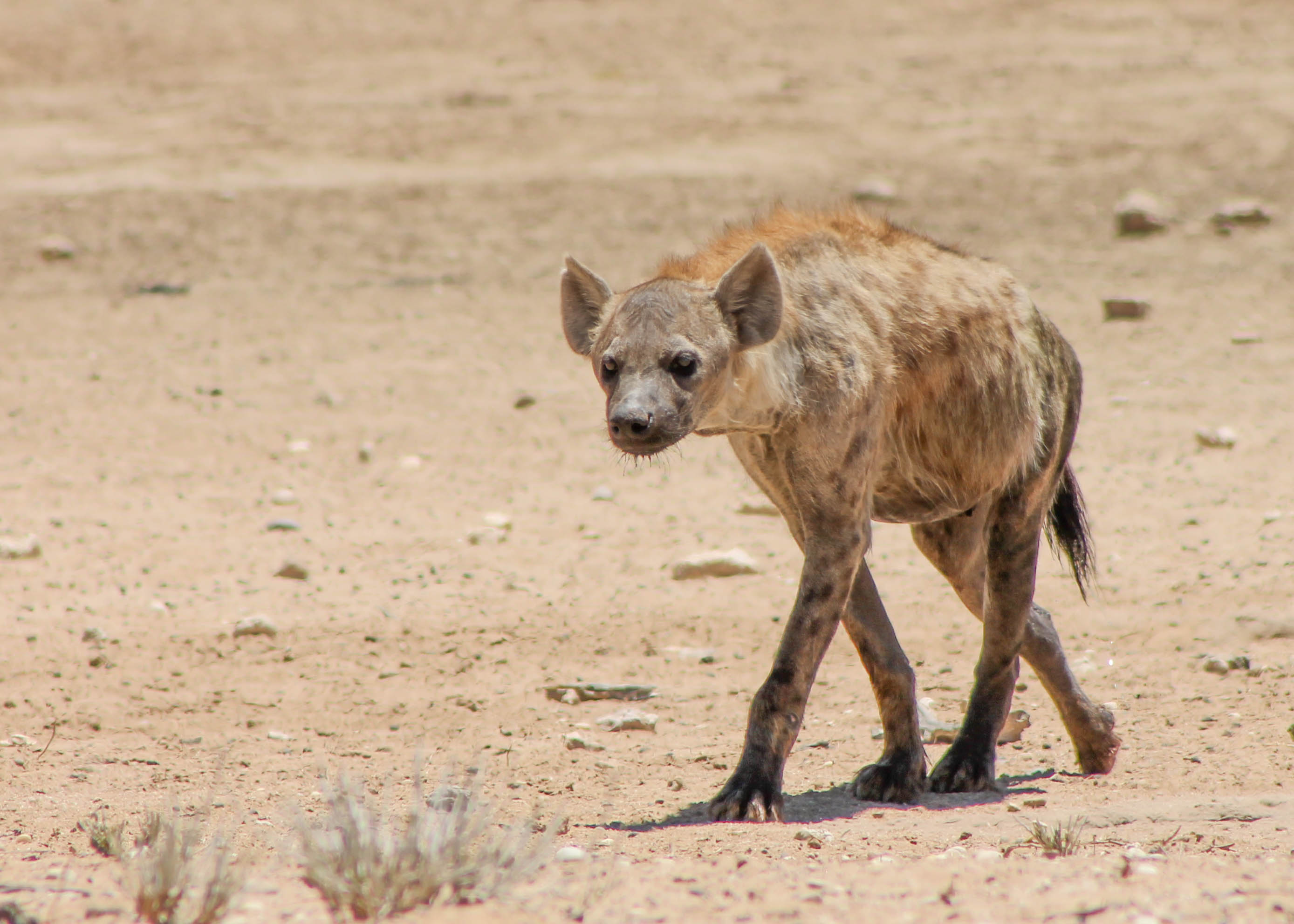 In the last few months the park has received some negative media coverage after a woman was attacked and killed by a leopard while camping. This incident took place in one of the park’s wilderness camps that are not fenced in order to give experienced campers the true wild Kalahari experience. In the wilderness camps it is up to the campers to ensure their own safety and in the case of the leopard attack, the couple camping was reckless and had been leaving food out, encouraging the leopard to come closer. Thousands of campers stay at the wilderness camps each year and have a great time because they know how to act and react in certain situations. In 2016 a couple camping in a wilderness camp had a close encounter with some lions and caught the action (with a very steady hand) on camera.

© Please note that this video has been shared from YouTube. All credit to the those who filmed and  posted it.

The more traditional camps, such as Twee Rivieren and Nossob where I camped are better suited for those enjoying more safety as well as some creature comforts such as a shop, a fuelling station and even a swimming pool. I spent the first half of my stay in the park at the Twee Rivieren restcamp, pitching my tent on hard, rocky ground that wouldn’t accept any tent pens. The restcamp is popular as it is the only restcamp with a gate directly into South Africa and it has both campsites and chalets so most tourist and travellers coming from the South African side stays here for a night or two before venturing deeper into the park. Even though the restcamp is fenced, the gate into the park stays open and it has been known that lions wander their way into the restcamp from time to time. I only found out about this after a ranger came up and warned me ‘to be careful of the cats’ as I was taking my midnight stroll looking for owls. 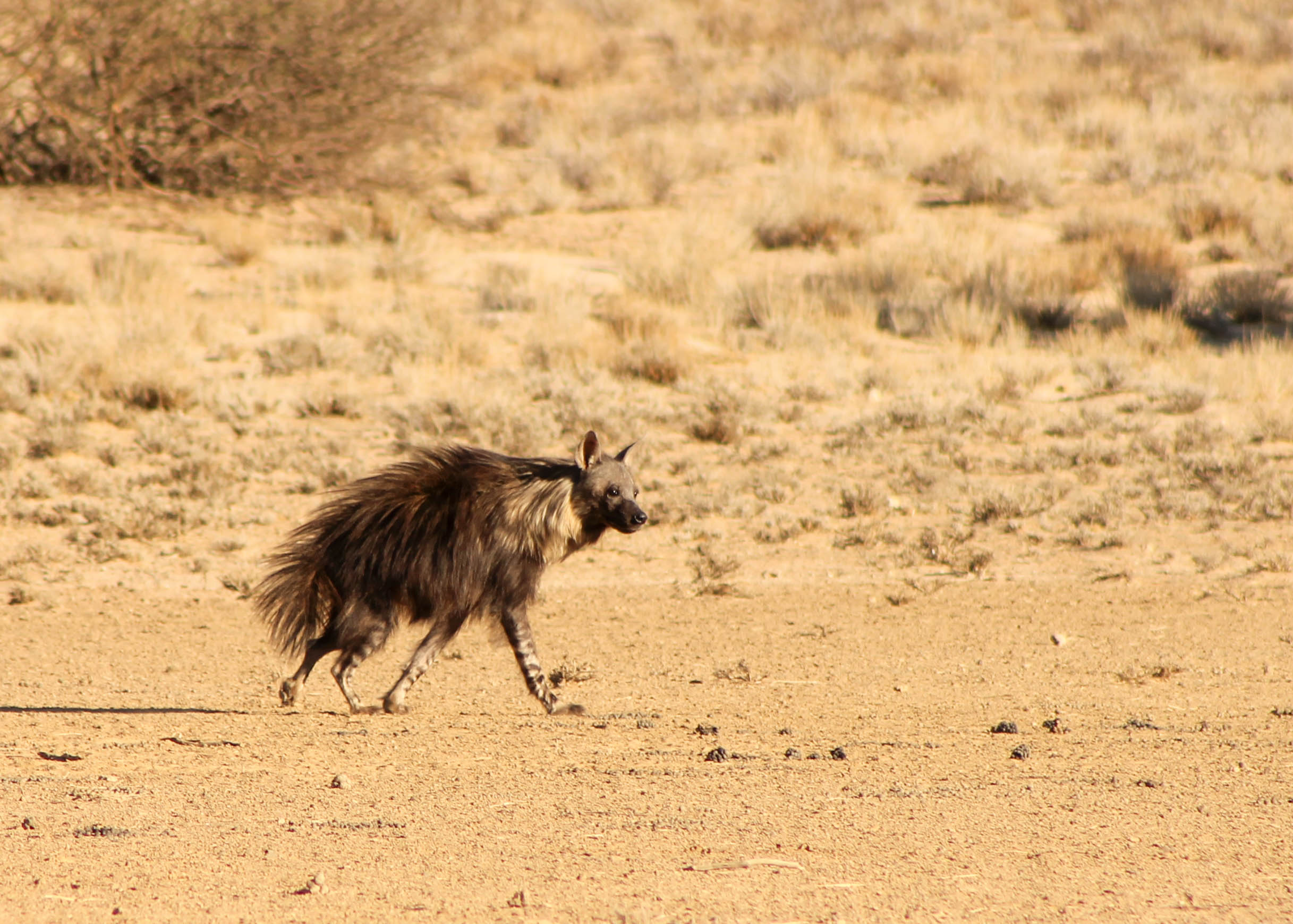 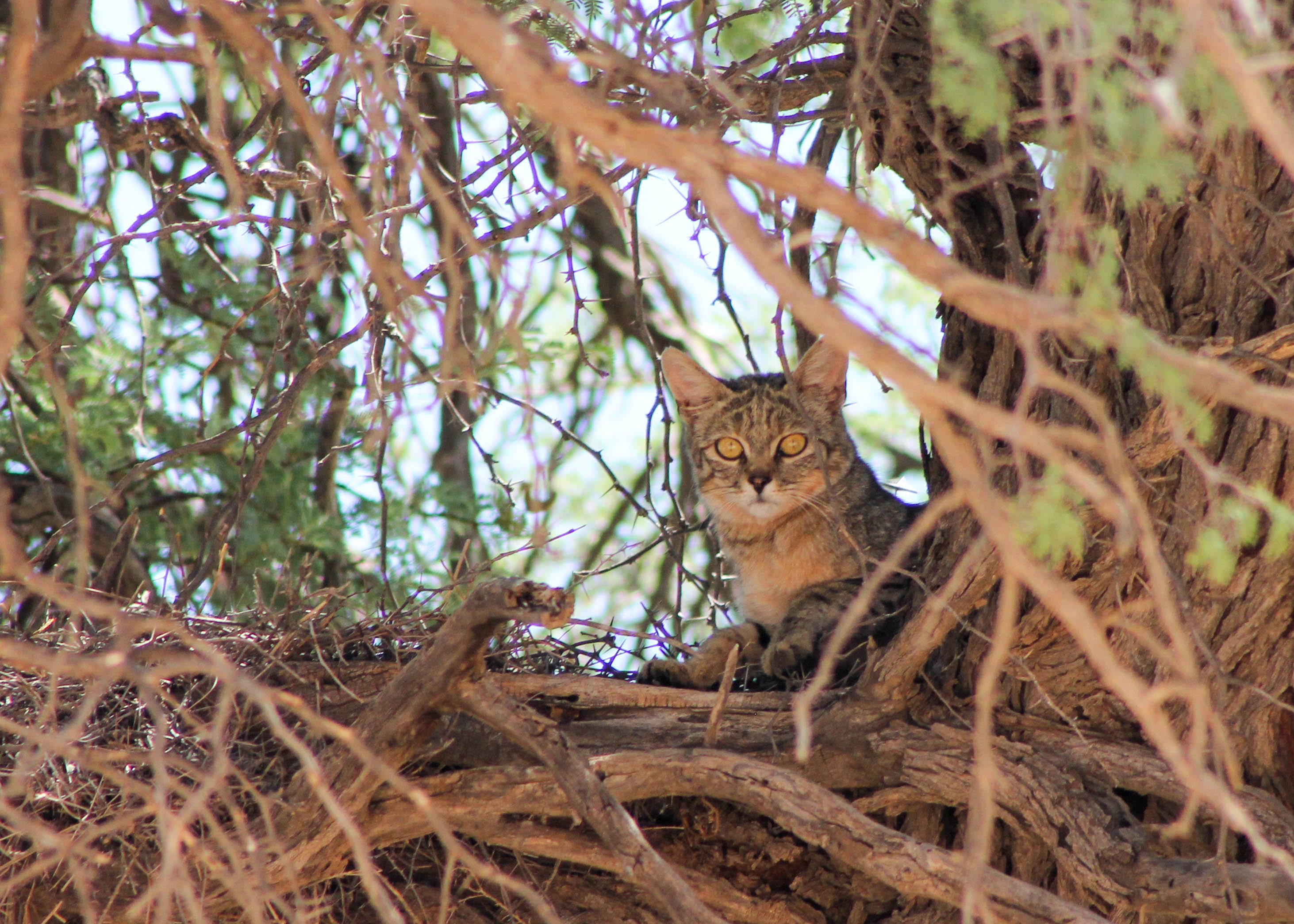 Nossob, the restcamp where I spent the second half of my stay in Kgalagadi has recently undergone some upgrades and I was very impressed with the restcamp in general. Upgraded camping spots are right next to the restcamp fence, each with its own bathroom and kitchen and even though jackals kept me up at night stealing food, shoes and even beers, Nossob was my favourite restcamp. Nossob is known for being the ‘Place of the Lions’ and when a pride of lions starts roaring right next to your little material tent in the middle of the night you get to know why. Listening to the pride deep into the night and finding their footprints in the loose sand right next to the restcamp fences was the highlight of my trip. Due to the remote location of the restcamp, electricity cuts off at 10h00 and with no man-made noise listening to the bush, the barking lizards and the desert breeze in pitch black darkness what an experience I won’t forget soon. 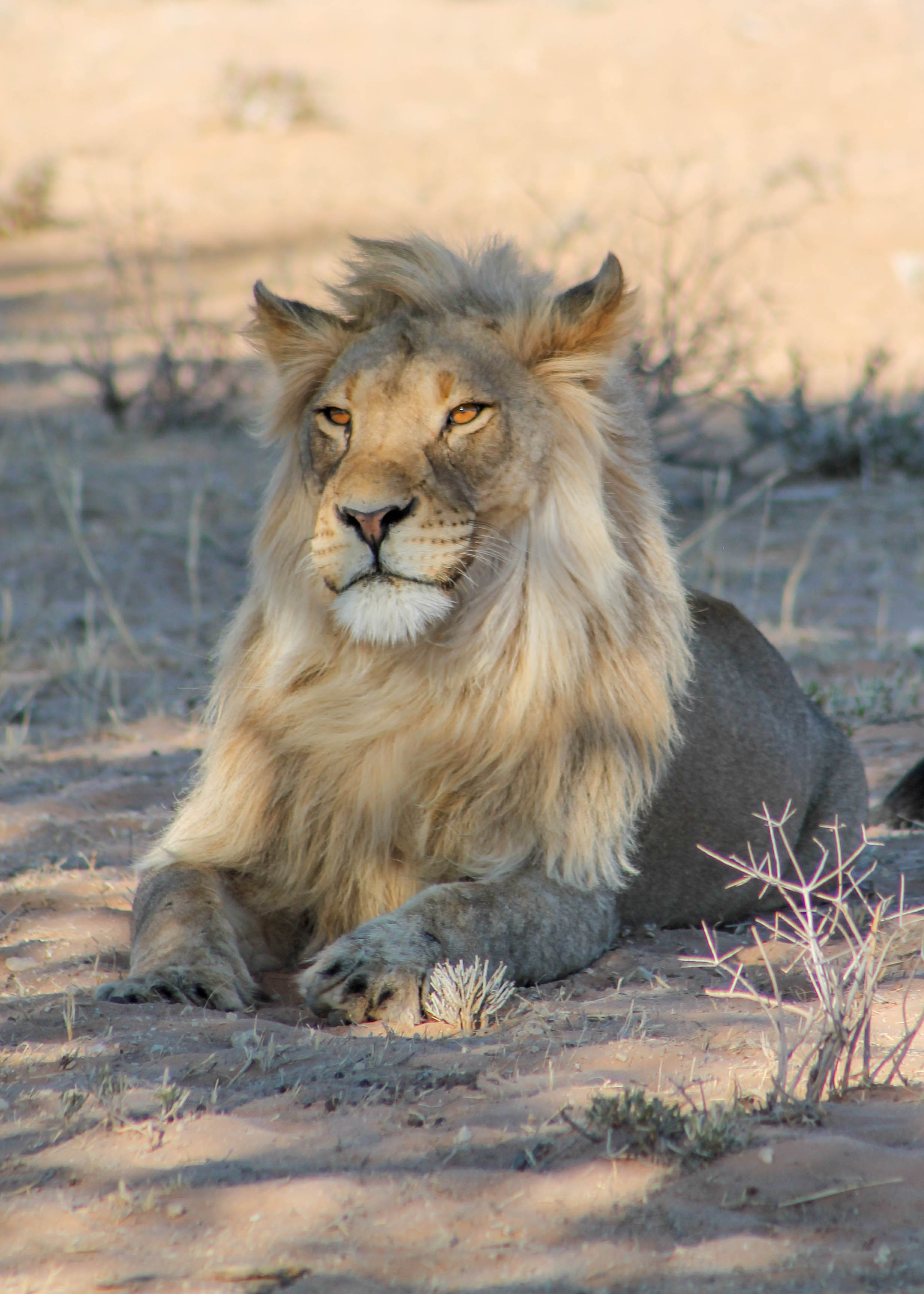 When camping, keep in mind that the temperatures in this area can be very diverse. In summer, midday temperatures in the shade can reach high into the 40°C’s and ground temperatures up to 70°C in the sun. My highest recorded temperature was on a game drive around 15h00 when, for a few minutes, the thermometer read a scorching 55°C! In winter however, night-time temperatures can make the mercury plummet under -10°C catching unprepared campers off guard. Between November and April you can also expect some rainfall in the park and from what I’ve heard the spectacular thunderstorms that bring the rain also bring sandstorms that rip through a campsite like nothing else. 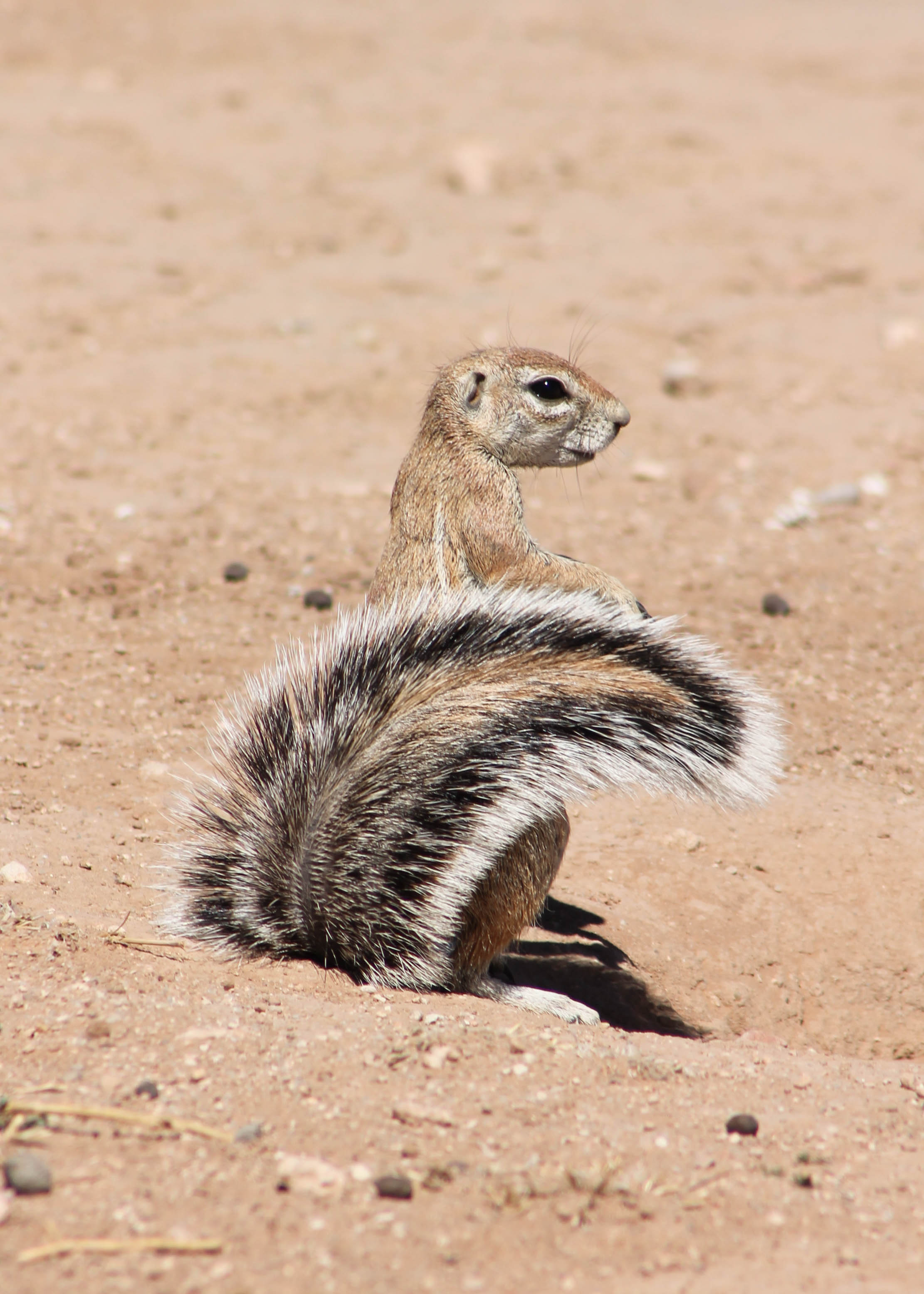 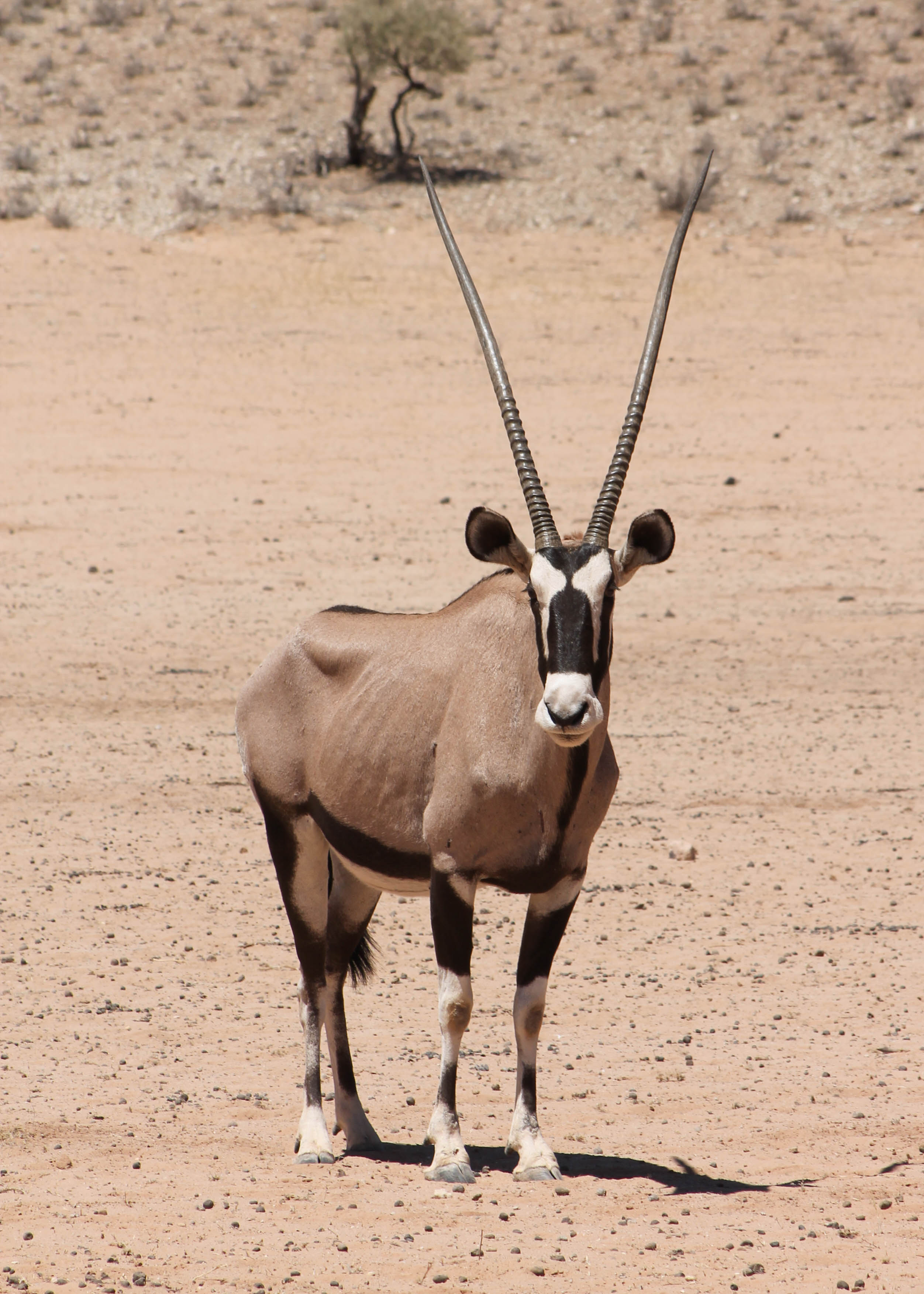 Even though it rains, all water in the park is pumped from underground sources, thus all waterholes are man-made and all 10 to 15km from each other. There are also two great rivers in the park, the Nossob and Auob river, but as the only flow on average twice every hundred years they have become the main driving roads in the park. Because of the limited water sources, all forms of life in the Kalahari Desert are well adjusted to the drought but will make use of every chance they get for a sip. At restcamp swimming pools, dragonflies zoom constantly overhead and at a picnic site a small Kalahari scrub robin came down to drink a drop of water that I had spilt on the table. 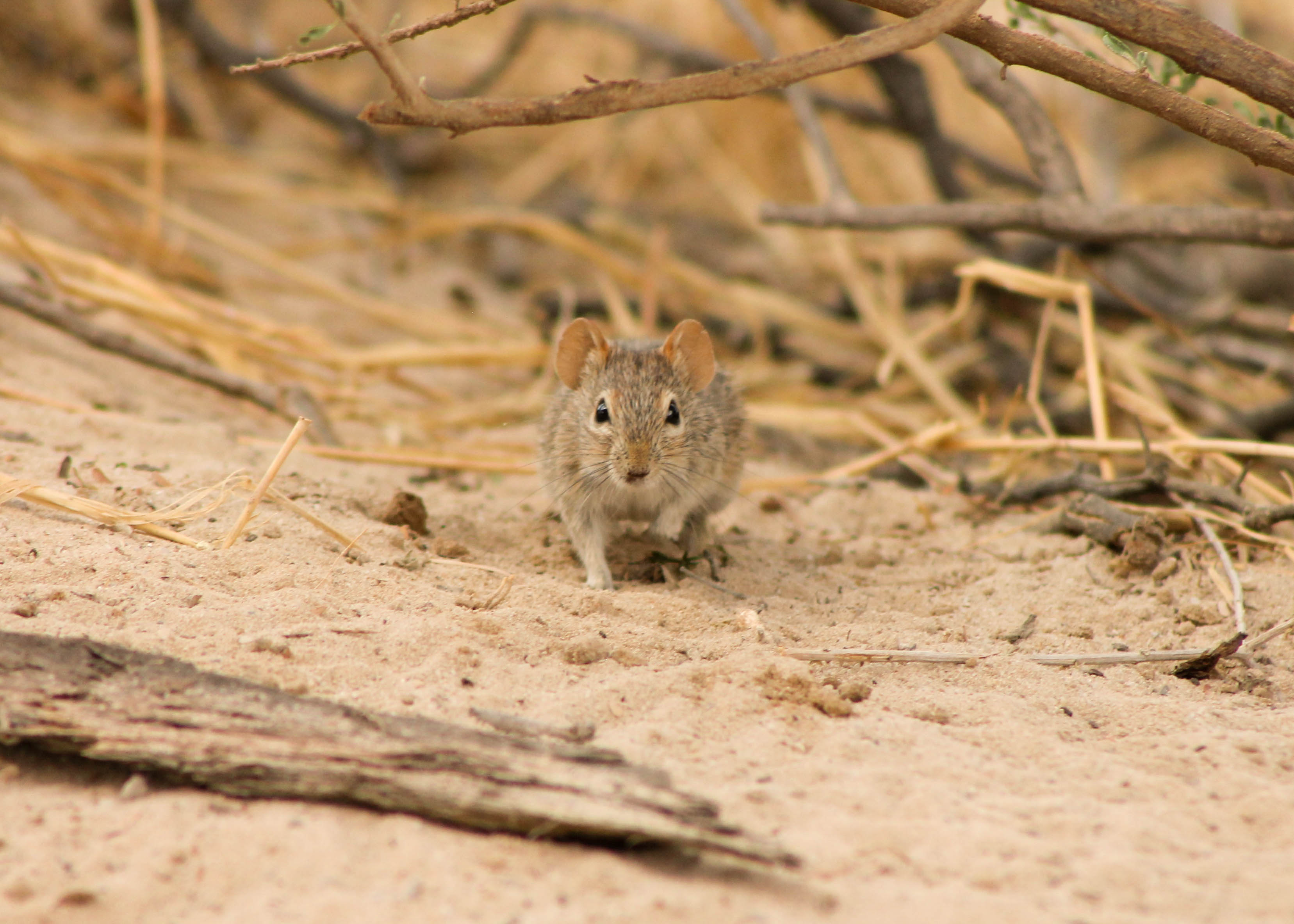 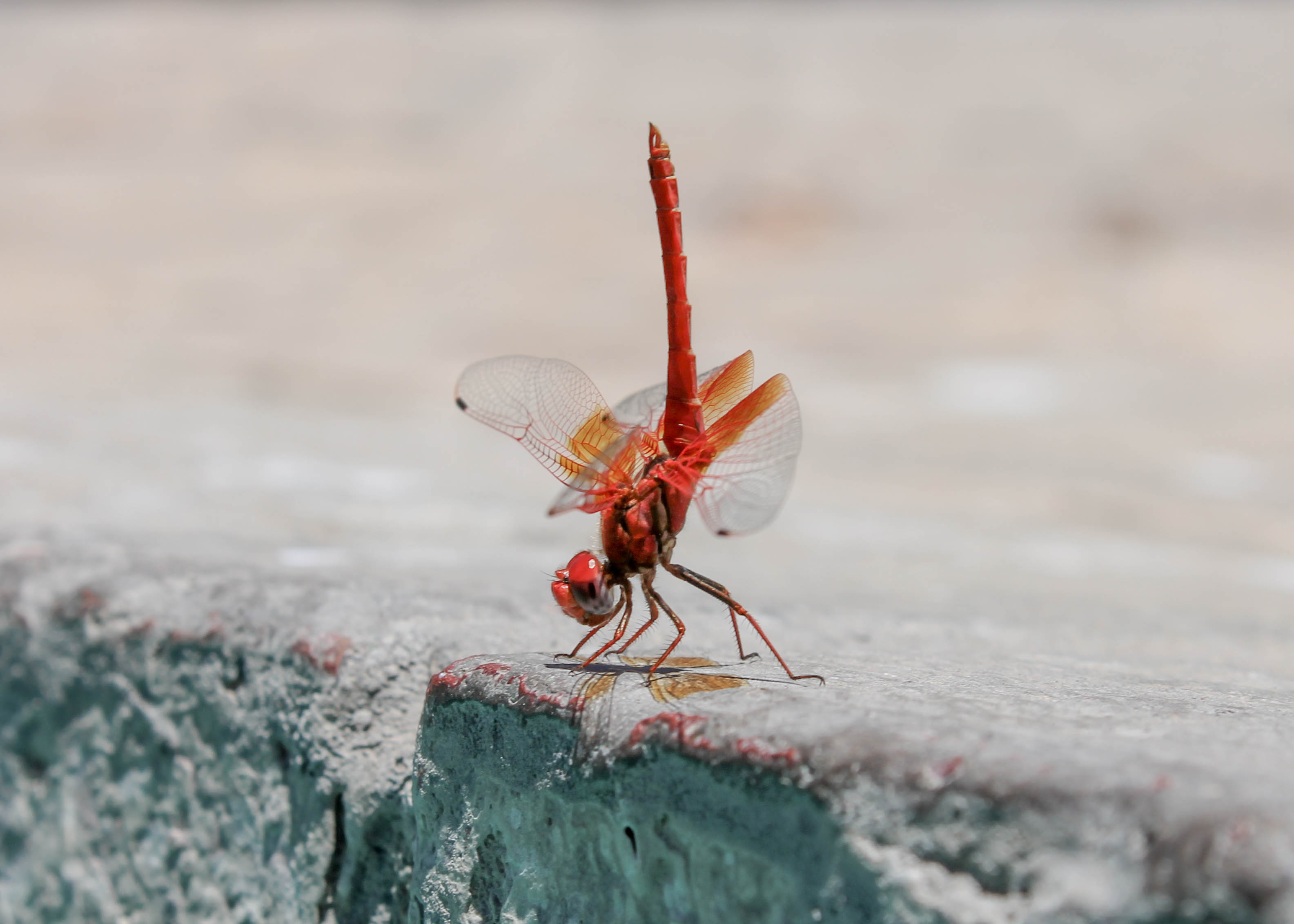 Kgalagadi is all about patience. Where as in other parks, such as the very busy and touristy Kruger National Park where all you need to do is look out for a traffic jam to see something, searching for wildlife in the vast openness of the Kalahari Desert requires time, travelling long distances and waiting for hours at waterholes without anything living in sight. From personal experience I can tell you that sitting in a 35 °C car for 4 hours hoping, wishing and waiting for a leopard to come down from a tree can be a frustrating experience, especially when you eventually have to leave without it moving an inch. Patience however is mostly rewarded in Kgalagadi, such as when a pride of lions with their young cubs come out of nowhere for a drink of water in the midday sun. 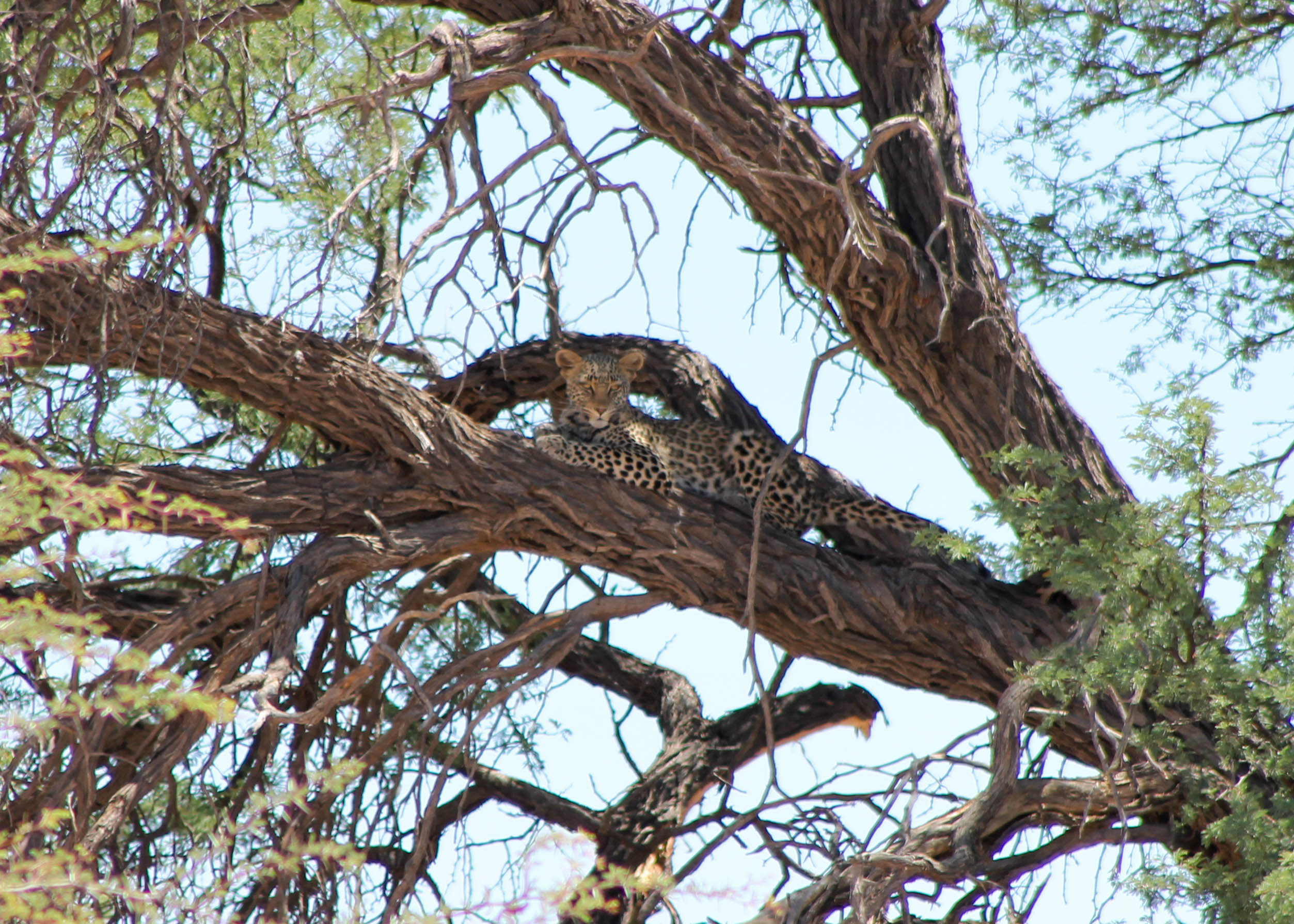 Lions, the only species in the family of cats that are social and live in a pride are in abundant in the park. Commonly believed to be bigger than lions in other areas of Africa, Kalahari lions are more athletic from covering big distances daily, sometimes more than 12 km a night for water and hunting. Males also grow majestic black manes, a distinguishing characteristic of Kalahari lions, as there is little to no bushes and undergrowth to damage the manes. Mostly nocturnal animals to avoid the desert heat, finding lions moving, playing or hunting during daylight hours are a real treat. They are inquisitive, cheeky and watching the pride hunt is one of the most exciting things I have ever experienced. Most of the time however you will find them sleeping or guarding a waterhole from the comfort of the shade. On a night drive we found two cubs, less than 2 weeks old, alone at a waterhole. The guide was surprised to find them alone and explained that it was uncommon for a female to leave cubs this young alone, especially as there were brown hyenas around who would surely kill the cubs if found. Surviving in the desert is difficult and in this case the female probably had to leave her young to hunt with the pride in order to produce milk from them. She would not return to the cubs until after a successful hunt, which after a few days would mean certain death for the cubs. Later the week I was however pleased to hear that the female had returned to her cubs and that they were all fit, fat and happy. 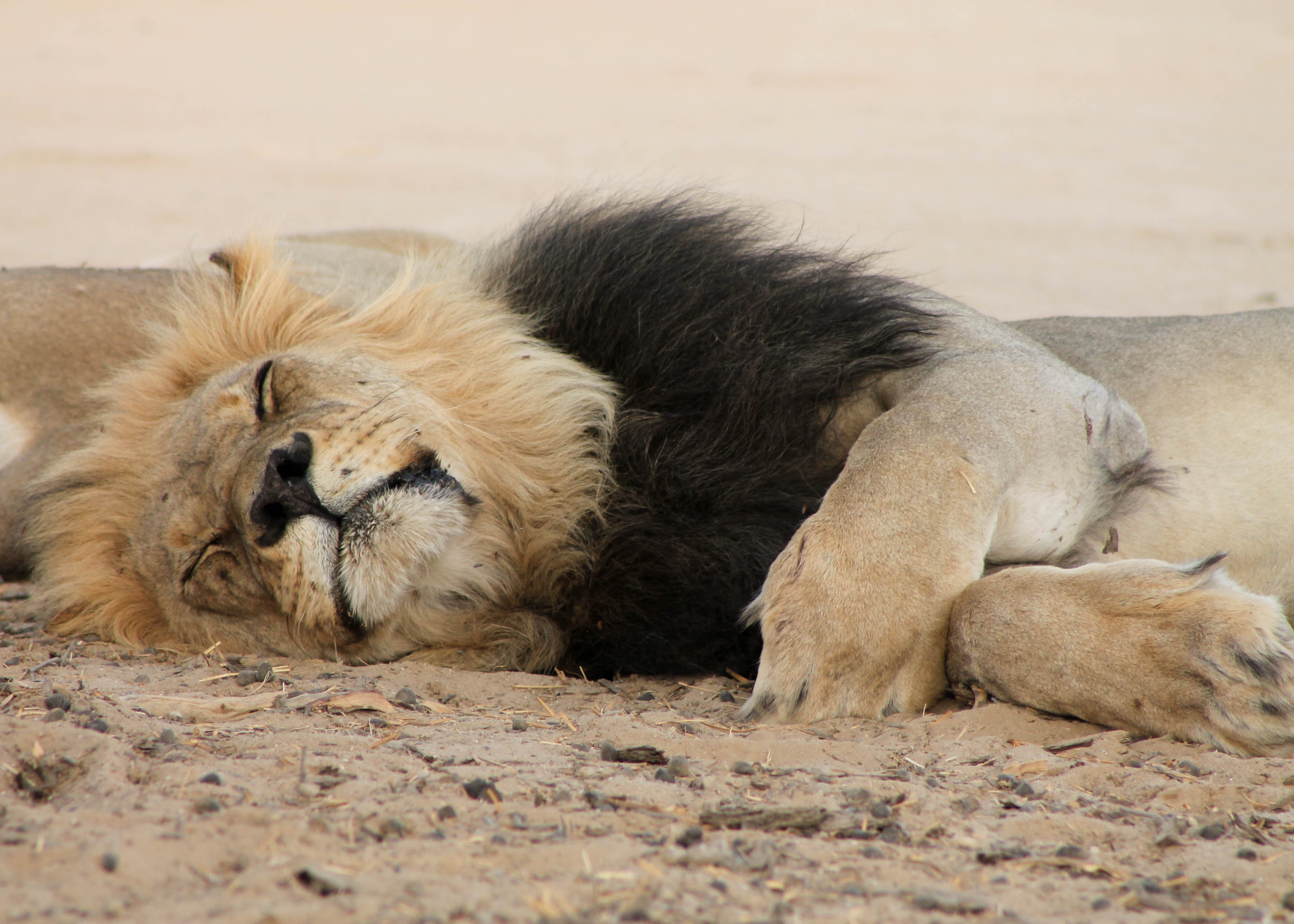 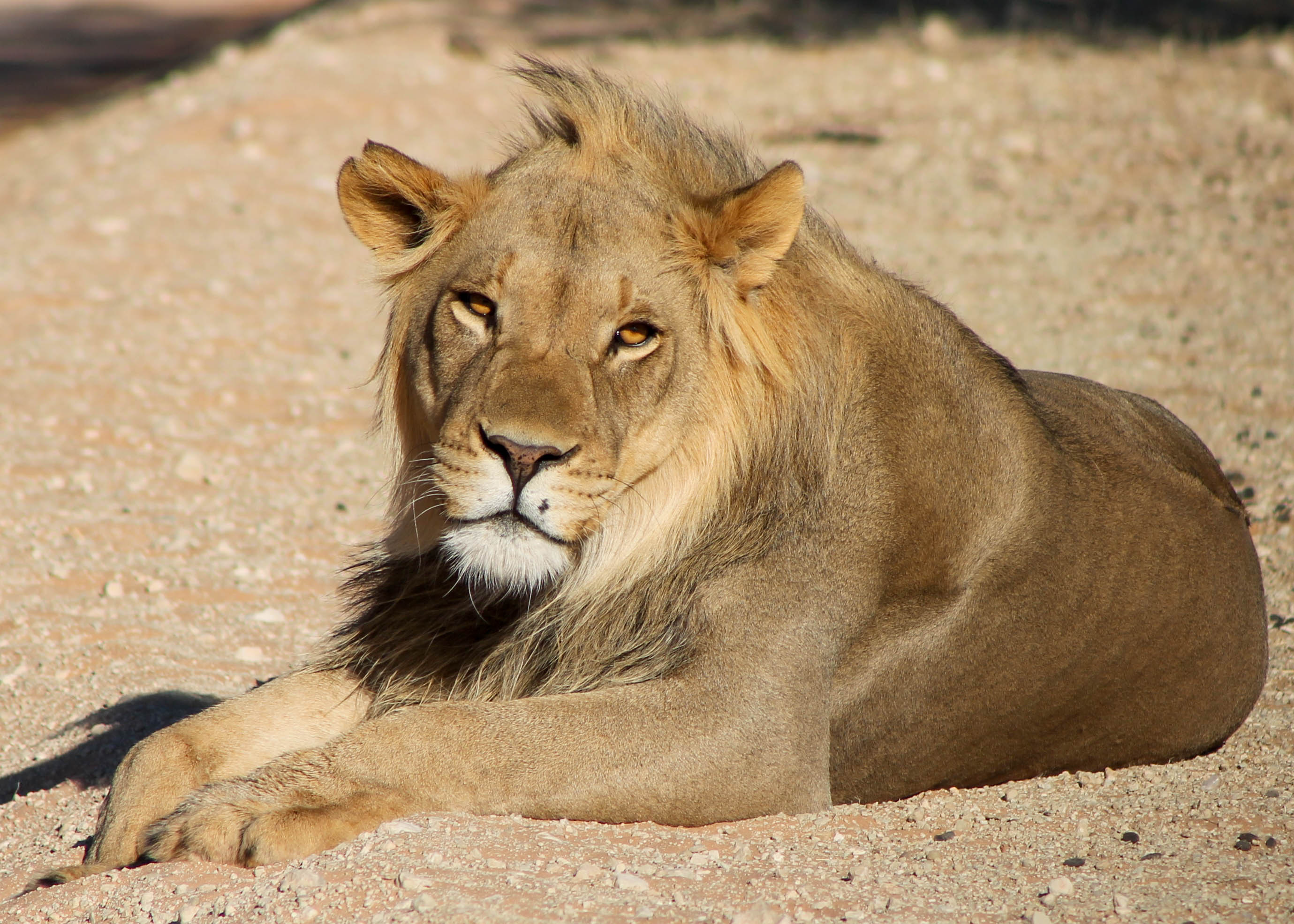 It just proved to me yet again that everything about the Kalahari is unforgiving. The heat, the drought, the dust, the bumpy roads. But after my time in the park I came to see a subtle, simple kind of beauty in the red sand, the warm wind, the quietness of the desert and the small details of life missed in the other parks. Watching a springhare with its fluffy tail hop around on its two hind legs, finding spotted hyenas take a mud bath or an oryx climbing a lonely dune is what made me fall in love with Kgalagadi. 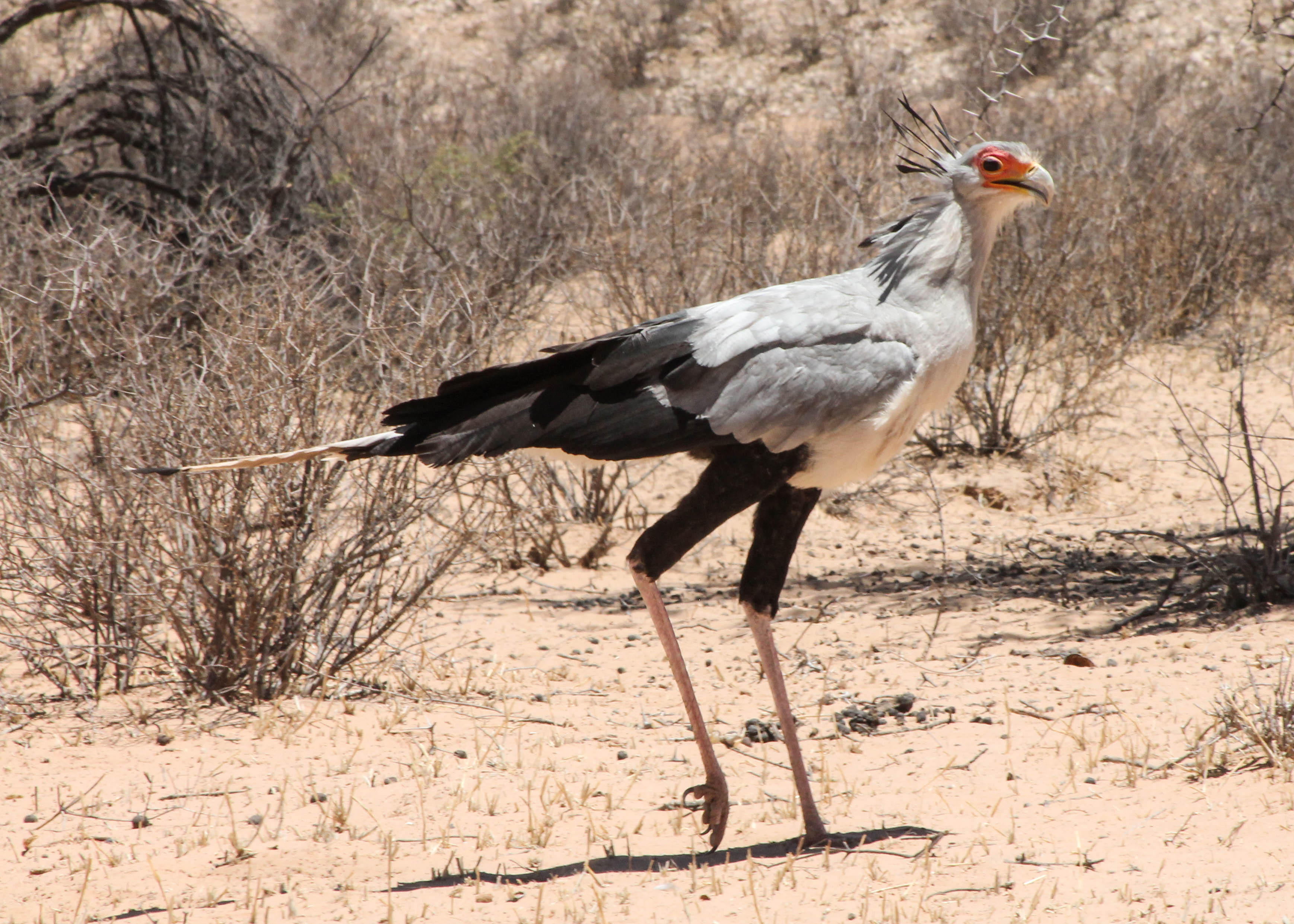 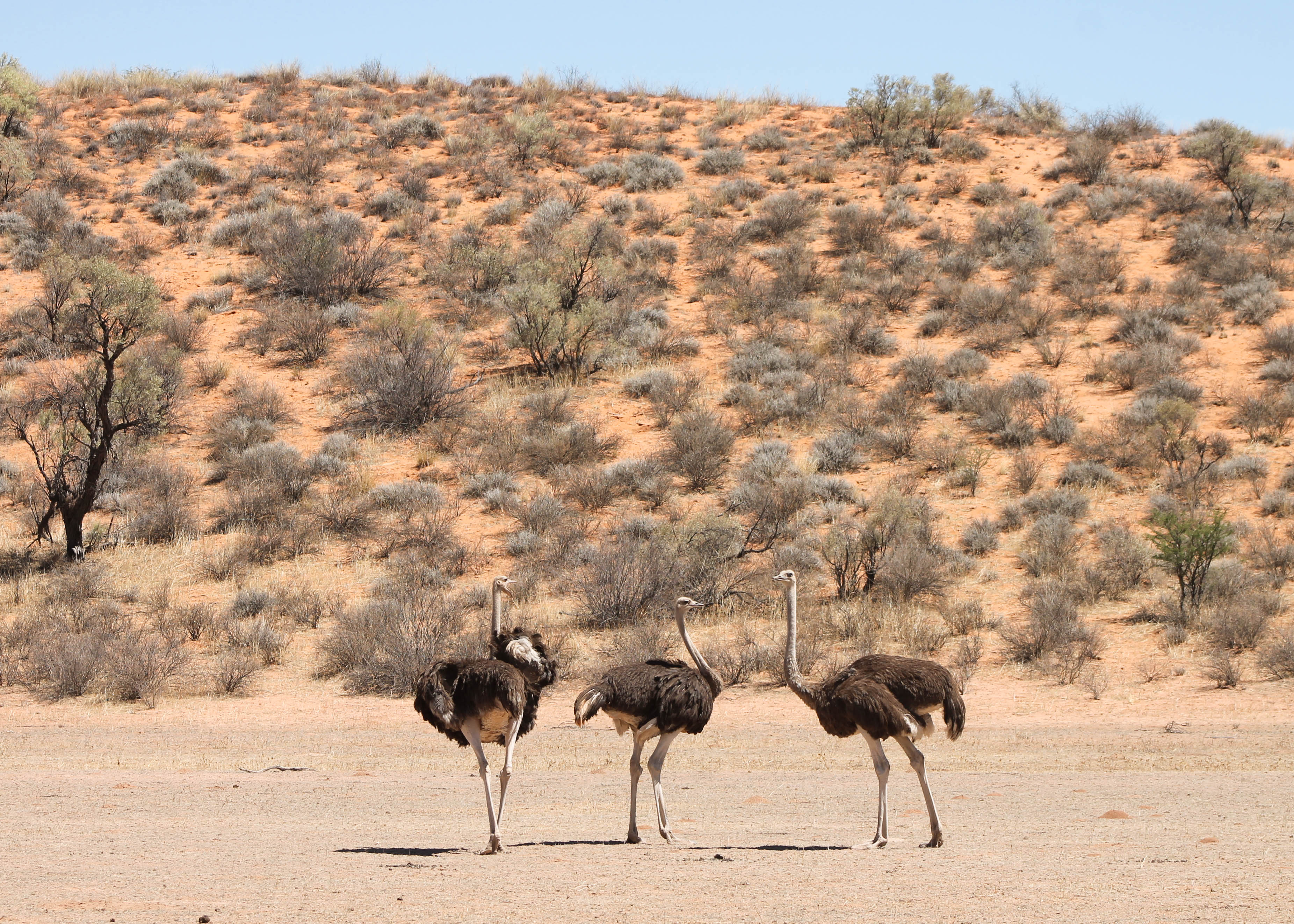 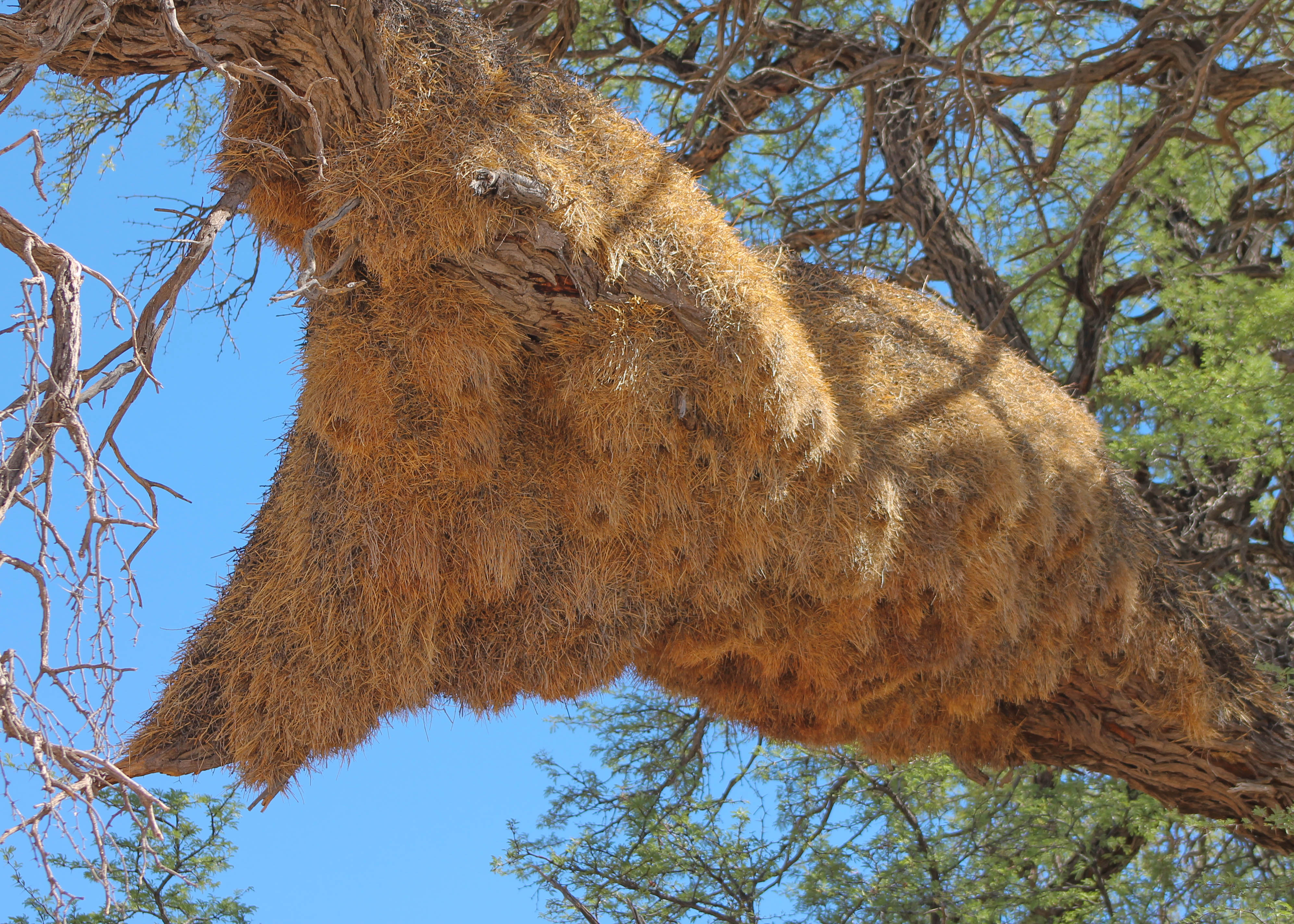 To see more of my pictures from the Kgalagadi Transfrontier Park, go view my Visual: Kgalgadi – The land of thirst diary. 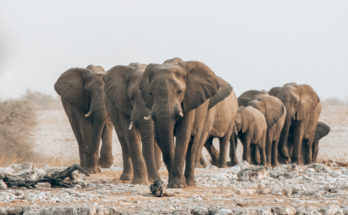 Etosha National Park in a nutshell 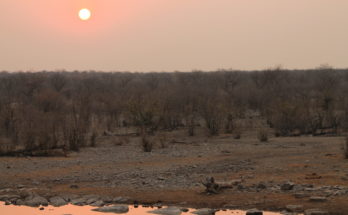 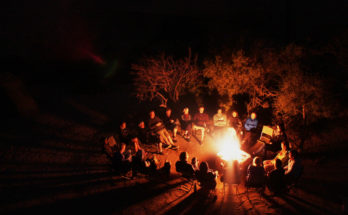