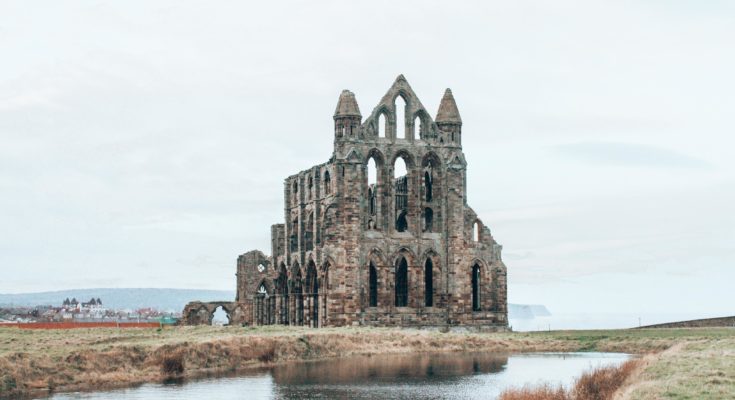 “Right over the town is the ruin of Whitby Abbey…. It is a most noble ruin, of immense size, and full of beautiful and romantic bits…” – Bram Stoker, Dracula

Perched next to a somber and deteriorating St Mary’s church graveyard on the hillside overlooking the terracotta roofs, whitewashed walls and grey cobbled streets, the Whitby Abbey has long been the dominating feature of this charming seaside town and became one of the most iconic images in Bram Stoker’s Gothic novel, Dracula.

Before the crumbling ruins, the grand abbey and even the founding monastery, the North Sea facing piece of land on top of the hill in Whitby was first inhabited in the Bronze Age and later became a Roman signal station and small settlement in the 3rd century, somewhere between 240 and 300 AD.

As the settlement, then known as Steoneshalh, meaning Tower Bay in reference to the Roman signal station, grew in popularity, safety and wealth, the first monastery was built on the site in 657 by St Hilda after she was appointed by the Saxon King of Northumbria to found a monastery, putting Steoneshalh on the map as one of the most important religious sites for the Anglo-Saxon people of the day.

St Hilda, also known as Hilda of Whitby, was born in 614 and during her lifetime before her death in 680 became an important Christian saint and the founding abbess of the monastery at Steoneshalh. She was known and revered for her wisdom that drew kings to her for advice and is still today considered one of the patron saints of learning and culture and poetry, as she was a woman of great energy who, outside of her main duties at the monastery, was also a skilled administrator and teacher.

During her time as abbess, St Hilda helped arrange the Synod of Whitby which took place in 664 at the monastery. During the synod the precise practices and the date of Easter was set, establishing Roman Christian practices in the new developing society in England. Over the next few hundred years the monastery expanded rapidly and became the home to great numbers of monks and nuns from all over Yorkshire. It was also the official burial site of the Northumbrian royal family and other Norman nobles.

After being attacked in brutal raids by the Danes between 867 and 870, the Steoneshalh monastery’s glory days came to a cruel end when it was completely destroyed by the Vikings. It laid in ruins for the next 200 years until, at the end of the 11th century, the respected soldier and monk Reinferd received orders from William de Percy,  who was a Norman nobleman who arrived in England immediately after the Norman Conquest of 1066, to erect a Benedictine Abbey on the foundations of the old monastery.

By the 13th century a large Gothic abbey stood where the monastery once did and as time passed, it was extended, enlarged and reconstructed several times as it was, like the original monastery, an important place of worship, business and politics. However, in the 1540’s the Gothic abbey was plundered by soldiers and almost completely destroyed under the watchful eye of King Henry VIII as part of his Protestant Reformation. As the abbey was no longer maintained, locals started using the remains of the old abbey to build houses and during World War I, on 16 December 1914, the remains were further demolished by German battleships attacking the signal station as part of the Whitby Raid.

Since the 1920’s scientists, archaeologists and historians have been hard at work excavating and discovering the abbey’s rich history and today the remains of the Whitby Abbey is a protected and managed by English Heritage. Unlike many historical sites around Europe, you are able to get up close and personal with the abbey’s ruins and you are able to explore the entire area by foot. There is also a wonderful visitor centre and museum, displaying artifacts found during excavations around the ruins.

Getting to the ruins will cost you £11 per person and it is recommended to explore the visitor centre to learn more about the history of the ruins before you visit them in the flesh. When visiting, give yourself 30-45 minutes to explore the visitor centre and museum and a further 60-90 minutes to discover the ruins. You can find out more about this fantastic place, including the abbey’s opening hours, by visiting the English Heritage website.

A local legend says that when sea birds fly over the abbey they dip their wings in honour of St Hilda, so make sure you look up often, if not to watch the birds but to take in the majesty of the place, as many of the abbey’s originals details are still visible higher up. Also remember to take your camera as there are great photo opportunities around every corner.

If you would like to see more pictures of the Whitby Abbey and my adventures around Yorkshire, please visit me on Pinterest at @LuzanneFletcher and follow me on Instagram at @luzanne_f. Also check out the related article section below if you want to read more about the amazing things to do and see in Yorkshire.

To help you make the most of the amazing pictures you will be taking at the Whitby Abbey, I have developed some amazing free mobile and desktop presets that you can use to transform your pictures. All you have to do is download the zip folder for either the mobile or desktop presets to the matching device, follow the easy step by step instructions and before you know if you will be editing like a pro! The Whitby Abbey preset will give your photos a bright but film inspired look. Once you have used the presets, remember to tag me on Instagram at @luzanne_f and use the hashtag #TravelPresetsByLu so that I can see your amazing photos! 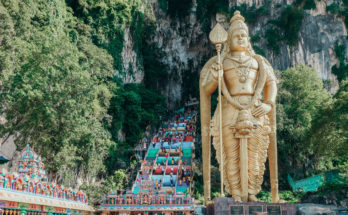 Batu Caves as a day trip from Kuala Lumpur