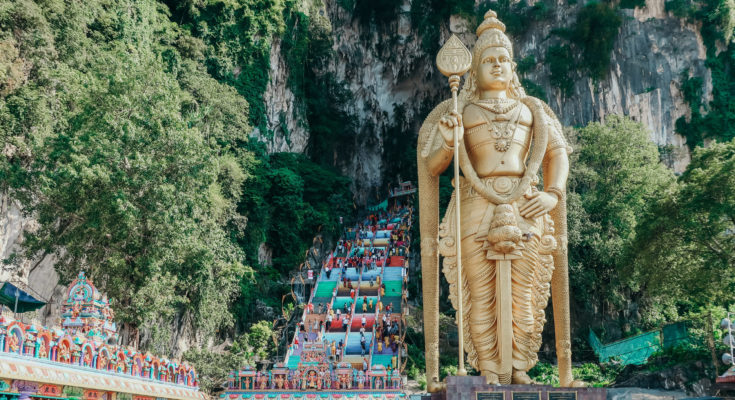 If you have an Instagram or Pinterest account, chances are you have seen pictures of the famously colorful steps leading to the Batu Caves many, many times. Rated on Tripadvisor as the number one day trip from Kuala Lumpur, I had no choice but to go see the rainbow-like path leading to the temple for myself. And even though Batu Caves has in recent years become one of Asia’s most photographed places, attracting millions of visitors to the colourful steps, Batu Caves much more than a place to get some great Instagram pictures.

What you should know about Batu Caves

Set in a limestone hill over 400 million years old, the group of caves slowly formed over years of eroding, accelerated by the Sangai Batu, or Stone River, which flows past the hill and after which the caves are aptly named. The caves were first discovered by the Temaun people of the Orang Asli tribe who are described as the original, native or aboriginal people and are considered the oldest inhabitants of Peninsular Malaysia, who used the caves as temporary shelters.

Skip on a few hundred years to the 1860s and suddenly the caves were transformed from shabby homes into an economic powerhouse when Chinese settlers began excavating bat guano – the accumulated excrement of thousands of bats living in the caves. Used as a highly effective fertilizer by the Chinese farmers to feed the growing population around Kuala Lumpur, the guano was also sought after as it was used in the production of gunpowder and another explosive materials made of potassium nitrate, as bat guano is rich in nitrogen.

The caves didn’t make it onto any record until 1879 when it was officially discovered by a hunting party, led by Captain H C Syer who was the first Superintendent of police of the region. He shared his discovery with naturalist D D Daly who wrote the journal article Caves at Sungei Batu in Selagor, published in the Straits Branch of the Royal Asiatic Society in July 1879 and with American zoologist and conservationist William Temple Hornaday, who travelled throughout southeast Asia and mentioned the Batu Caves in his first publication, Two Years in the Jungle, published in 1885.

After Captain H C Syer’s discovery, the caves attracted some media attention and in 1880, a rich Indian Trader, K T Pillai started promoting the caves as a Hindu place of worship. Seeing a resemblance between the shape of the cave’s main entrance and that of the Vel – the divine javelin of the Hindu war god Lord Murugan, Pillai dedicated the temple to the war god and installed a consecrated statue of Sri Murugan Swami in what is today known as the Temple Cave. In 1892 he also organised the very first Thaipusam festival, of which you will find out more later in this guide.

It took about 30 years before the first wooden steps were build in 1920 leading up to the Batu Caves. The original wooden steps were soon replaced with 272 concrete steps which where transformed in August 2018 into the colourful rainbow staircase you will find at the caves today. With each set of steps painted in a different range of pastel colours, the steps have become one of the most photographed places in southeast Asia and is always crawling with Instagrammers and photographers from dawn to dusk.

After making your way up the 272 steps you will enter the main cave complex, known as the Temple Cave. Although there are many other smaller caves with Hindu shrines in them, many depicting the story of Lord Murugan’s victory over the demon Soorapadam, the Temple Cave is the centerpiece of the Batu Caves and is made up of two gigantic caverns connected by another set of steps. Inside the first cavern, at the top of the stairs, Lord Murugan’s six abodes are carved into the walls. The second upper cavern holds the temple of Sri Valli Deivanai, Lord Murugan’s wife.

Batu Caves and the Thaipusam Festival

The Thaipusam festival, mentioned before, attracts more than a million Hindu devotees from all over the world to the Batu Caves each year. A combination of the word the word Thai, meaning month and Pusam, the star with special significance in the Hindu religion, the festival is celebrated by the Tamil community on the full moon night when Pusam star is at its highest point, usually at the end of January or the beginning of February. The Thaipusam festival commemorates the occasion when Parvati, the Hindu goddess of fertility, love, beauty, marriage, children, and devotion gave Lord Murugan the Vel.

During the festival, devotees dressed in all shades of yellow and decorated with peacock feathers and flowers imported from India, must walk from the Sri Mahamariamman Temple in central Kuala Lumpur all the way to the Batu Caves. The journey takes around 8 hours and during this time, devotees carry containers of milk by hand or by supporting a colourfully decorated kavadi on their shoulders with the milk hanging from either side in brass or clay pots. When arriving at the Batu Caves, devotees must bathe in the Sungai Batu river and then proceed up the steps to the Temple Cave with their milk as offering to Lord Murugan.

As if milk, flowers and walking for hours are not enough, a 140-foot (42.7 meter) tall statue of Lord Murugan was erected and unveiled at the Thaipusam festival in 2006. Built out of 250 tons of steel, 300 liters of gold paint and 1 550 cubic meters of concrete, it is by far the tallest statue in Malaysia and the third tallest statue of a Hindu deity in the world, after the Garuda Wisnu Kencana statue in Indonesia and the Kailashnath Mahadev statue in Nepal.

What you should know before you go

Entrance to the Batu Caves is competently free but you will have to pay a few Malaysian Ringgits if you would like to go into some of the smaller temples and visit the shrines. As with most temples in Asia, it is best to dress conservatively as you will not be able to go up the stairs or visit any of the temples if your knees and shoulders are not covered. When inside the temple, act responsibly and always be respectful of the people who visit this fantastic place for religious reasons.

Other than hosting thousands of human visitors each day, Batu Caves is also home to an extraordinary list of other living things. Other than hundreds of tropical plant species thriving in the humid Malayan climate, the cave is also a habitat for several species of bats, frogs, lizards, snakes and of course the scampering macaque monkeys who are very cheeky and should be avoided and never, ever fed. They are known to grab bags, sunglasses, hats and any kind of food and drink straight from people’s hands, so make sure you go snack-free and look after your belongings.

Also note that as the Thaipusam festival attracts millions of visitors to the steps, cave and temples over a single weekend, the area becomes very dirty and littered and is best avoided for about a week after the festival.

How to get to Batu Caves

Not even 15km from the centre of the city, Batu Caves is the perfect place if you are looking for a day trip from Kuala Lumpur. For the cheapest and most convenient way to to get to Batu Caves, first get yourself to KL Sentral. From there you have various options to get to the caves, but the easiest way is by taxi or train.

Using the Grab taxi service is one of the easiest ways to get around Kuala Lumpur. By downloading the app you are able to request taxis from and to specific locations and it is very cheep. From KL Sentral the Grab taxi fare will be around RM25 each way and should take 15-20 minutes, depending on traffic.

If you are looking for the cheapest way to get from the city to the caves, use the KTM Komuter train that will drop you off less than 200m from the Batu Caves entrance. Tickets are available at the KTM Komuter ticket office inside KL Sentral KTM Station for RM2.60 one-way per person and the journey takes about 40 minutes. To take photos and have the caves all to yourself, make sure you get there super early. The first train from KL Sentral to Batu Caves leaves at 6:56 AM, so make sure you are on it. Remember to check the KTM Komuter timetable a day before you plan to go for any changes or notifications. If you are a solo female traveller, look out for the women-only carriages for some extra piece of mind if you are travelling early in the morning.

If you would like to see more pictures of the colourful Batu Caves, please visit me on Pinterest at @LuzanneFletcher and follow me on Instagram at @luzanne_f. For more fun things to do and see in Kuala Lumpur, be sure to check the related post section below. 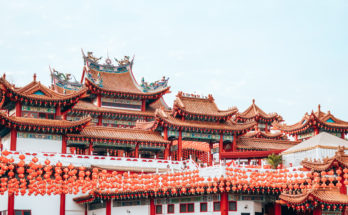